I sat down to post this 10 times in the past week & a half but it seems like I’ve been inundated by drama and from every angle, none of it mine, all of it unwanted, most of it unnecessary. I guess that’s life during tough times?
I’ve written about EDR06 in the past but the short of it is, I went to follow my good friends on another hair brained idea/adventure, we already had quite a few crazy times under our belts some great, some stressful and even some lucrative, but all memorable. EDR06 was, has been & still is all of the above.
April 06, I had never powered up a welder, picked up an angle grinder, seen copy of  Street chopper, Dice, or Greasy Culture. Basically I bolted some shit on a used Ducati and showed up 25 min after everyone had split for the Mexico boarder. The morning after arriving at Rueben’s Campo I finally got to check out the bikes. As I was going from bike to bike the crew from Texas, New Mexico, and Arizona came thundering into camp said a brief hello, nice to meet you and immediately downed a bottle of tequilla and quite a few beers.
Instantly I was drawn to the girder on the raw Panhead, I could tell it was done by hand & I already knew it was ridden hard. Later on that afternoon I met George & Wendy Counes of Spartan Frame works, they’re good people, George is a straight shooter and craftsman in every sense of the word, Every time I see that girder I still get the same feeling I did that morning in San Felipe. I’m still trying to figure out what I want to build around one.
SPARTAN FRAMEWORKS 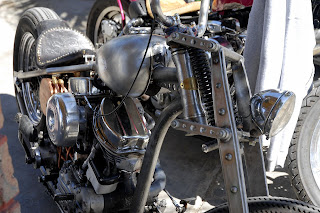 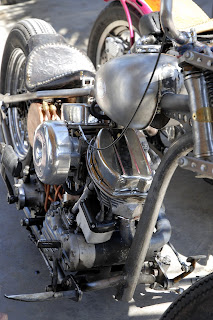 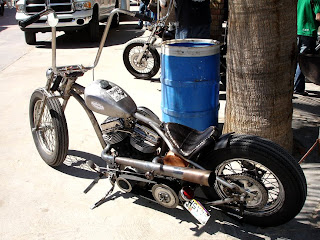