The problems develop when a worn bushing on the starter clutch causes the gears to slip out of mesh in the beginning of a kick, and your leg slams straight and tries to bend the knee in the wrong direction. It’s called “Sportster knee”.

What other Harley, or motorcycle for that matter, has crippled more people than the legendary Sportster kickstart? If rebounding compression wasn’t dislocating the knee or throwing the rider over the handlebars then the slip-through kick start gears extend the leg past where its supposed to go .snapping the kneecap. Sportster knee, the tell tale limp, familiar with riders of the era is a badge of honor. The electric start has saved a whole generation from this mind numbing pain. This “half-a-Harley” with a short man complex is meaner than a junk yard dog? 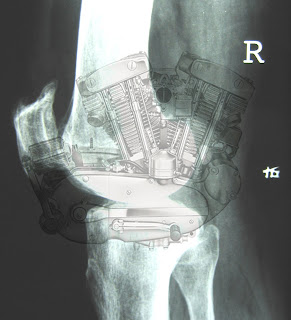 Well Pat’s Ironhead has developed some carb & charging issues so while trying to get it all figured out he had the kicker slip through twice. The first one only required some ice and a couple days off his feet the second one happened a week ago and broke a chunk off one of his leg bones, now he’s hobbling for 6 or 8 weeks with a piece of bone floating around in there.
Then last night we all were trying to get it figured out and the damn thing did it to me. I hopped around in a huge amount of pain, made uncontrollable noises you only hear at the zoo or a swingers party, started sweating profusely and fighting consciousness. All that passed in 10 or 15 minuets. Today I’m sore as hell and I’m sure it looks pretty funny the two of us limping around at the same time.
Anyone have a juice starter set up for a 76 XLCH on the cheap?