Sometime Back in the mid 90’s I was hired by Vans to help kick start their once dominant position in action sports and since I was there also create an entire snowboard boot program, all of which was expected to be accomplished on a ridiculously small budget. So I assembled a small group of people consisting of an 18 year old ESP skater named RP Bess and the talent of a small creative agency known at the time as MBC. At first I had to be all the team mangers, Skate, Surf, BMX, Motocross, and just a small handful of Bands at that point. RP graduated high school and immediately took over the skate program and whatever tasks I could throw at him & he did it with gusto. MBC at that time was the team of Bill Bryant, Simon Cudby, Drew Kuriger, & I believe back then McGoo was subcontracted as copy writer/creative guy. We all sat down, devised and accomplished a masterful plan to set this publicly traded companies core sports back on track & all for $53,000.00. Once this was set into motion I set out to assemble a snowboard boot team armed with only promises and smiles. Then proceeded to design and develop a complete line of boots in attempt to accommodate men, woman, children, different riding conditions, styles and whatever else we could think of. The first Vans boots were some old burton leftover shells with some sort of Airwalk knockoff liners we found in a Korean factory. We put some logos on 200 pair and got them out to the few riders we had and anyone else who wanted them. Very very few pair ever hit a stores shelf. With the help and at that point Vans VP, Bill Mann (Airwalk Founder) we somehow came up with a pretty amazing line of boots. I hit up MBC to make up a trade show booth for a couple grand and we headed to Vegas for the one & only chance to sell your snow product, SIA. Six months later when all orders had been filled, new boots were moving off the shelves & Vans sat #2 behind Burton in their very first season. A lot of money was made, comparatively I saw very little of it and was really beat down from the rigors of trying to please share holders and many others who just didn’t get what these sports/lifestyles were all about. So before I hurt someone or myself I decided to leave for a much quieter lifestyle in Carlsbad.
I feel real good about all of it as I think our kick start fired Vans right up! They remembered who their customer was and jumped into the Triple Crown event series, Warped Tour & all with huge dollars. Which my small crew and I went back and capitalized on too, but that’s a whole other post.
Very little of our time is in the book and not much of the original Orange, Ca. factory is either and that’s a damn shame. It was so amazing to walk out back at any given time and watch shoes being made.
The book does give much deserved credit to Steve Van Doren, when I was there the lords of the shareholders had him running parking lot sales & carnival type bullshit. That Guys giant heart is in the sports, making sure everyone’s really happy, full of food and loving Vans.
Check it out, 43 years of business is pretty impressive no matter how you slice it. 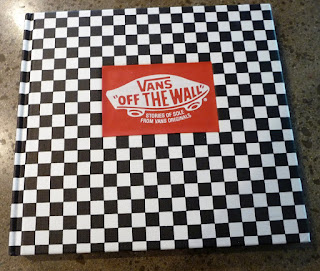 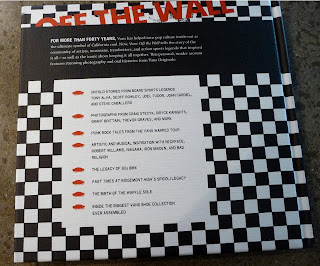