Ed Norton got the call, we’re headed to Sturgis. 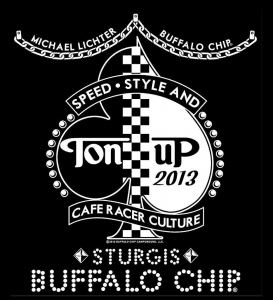 Lucky number 13 for the annual “Motorcycles as Art” exhibition at the legendary Buffalo Chip during the Sturgis Motorcycle Rally this summer is titled “Ton Up! – Speed, Style and Cafe Racer Culture,” focusing on the origins and continued popularity of the Café Racer movement worldwide.

Co-curators Michael Lichter (LichterPhoto.com) and Paul d’Orléans (theVintagent. com) have assembled a comprehensive display of 32 machines from 12 makes and 6 decades, plus never-published photography – from the original café racing scene in 1960s England to the present, paintings by Andrea Chiaravalli, Brent Wick, Guenevere Schwien and Triumph ‘resident artist’ Conrad Leach, images from the Ace Café Collection, vintage leather ‘Rocker’ jackets from the Lewis Leathers archive, the “One-Show” 21-helmets display of custom painted helmets, photography by Erick Runyon and other artists to be announced.

Each year, the “Motorcycles as Art” exhibition garners tremendous media coverage from around the globe, and thousands of enthusiasts in person. This year’s exhibition will get even more recognition as it will live on in the coffee-table book “Ton Up – Speed, Style and Cafe Racer Culture,” published by Motorbooks International. Michael Lichter will photograph all the motorcycles in his Sturgis studio for the book, which will also include the jackets, artwork, and photographs from the exhibit. Paul d’Orléans’ is writing a comprehensive history of the Café Racer movement for the book; from its deep origins in speed-modified road bikes from the ‘Teens, to the ‘classic’ period in England in the 1950s/60s, through its various resurrections in the 1970s, 80s, and especially, with the advent of Internet motorcycle blogs, TV shows, and ‘Café Racer’ magazines, the explosive popularity of the style in the 21st Century.
“Ton Up! – Speed, Style and Cafe Racer Culture” sponsors include GEICO Motorcycle Insurance, Handy Industries, Hot Leathers, our official exhibition shipper Keyboard Motorcycle Shipping, Russ Brown Motorcycle Attorneys and Spectro Performance Oils. The exhibition will be open August 3rd – 9th 2013 and is located next to the east gate of the Buffalo Chip and offers free admission to the public, and Buffalo Chip guests.
The ‘Motorcycles as Art’ exhibitions are hosted each year by the Legendary Buffalo Chip, this year celebrating its 32nd consecutive annual concert series, which attracts the music industry’s hottest stars to their famed camping resort every August during Sturgis Bike Week. The “Chip” is set on 580 acres 3-miles east of Sturgis.