In 1971 I was 5 years old, my father and two of his brothers had a pretty nice stable of toys and some great land to play on. While my Dad & Uncle John were into motorcycles in the summer and snowmobiles in the winter Uncle Pete had a Chaparral Six wheeler. Me being way too small for a Yamaha endouro or a Bultaco alpina  I was taught to run the 6X6, forward, reverse, float, turn on a dime stick steering, I was hooked. Most all of the toys faded away as my Dad and uncles got hurt or just lost interest. On my 7th birthday and loaded with friends I rammed the Chaparral into a cherry tree, busted a big hole in the fiberglass body, it ended up being sold a little while later.
2000 We’re building a downhill BMX track in Wilmot WI on the drive to the venue every morning there’s a six wheeler sitting in a yard and man it looked cool. An online search reveals Richard Clark who is THE 6X6 historian guru and parts connection. I contact Richard as I’ve decided I need a six wheeler and of course the first thing I need to know is who made the most BadAss unit because I want that one. Richard said thats easy it’s the Attex 500 Super Chief, 500cc twin cylinder two stroke. I then ask do you know where I can find one, he say’s yes, I have two, one that needs completely restored and another that I keep in my basement that only has 42 hours on it. once again, of course I need the pristine unit & after some short negotiations it’s on a truck headed for California.
When it showed up I had to replace the original cool vulcanized hub/tire combo with new steel rims and tires, I decided to add a bilge pump, some passenger grab handles and tune it up but other than that it was in amazing condition.  The childhood Chaparral had a 340cc 2 stroke single so when I got in the Super Chief I quickly discovered a whole new level of fear!  This thing was a deathtrap! The Attex would wheelie on the back two wheels no problem, 50 mph in a heart beat, no problem. Six balloon tires, no suspension, no seat belts = fecal incontinence. It just wasn’t that fun machine you pulled out at a BBQ. So after a couple of sessions it went on e bay and I made $400 on the whole ordeal. Someday when I have some land I’ll buy another vintage 6X6 but do the modern four stroke conversion so everyone can enjoy it.
70’s Chaparral ATV with the original vulcanized hub/tire combo. It’s still my favorite body style 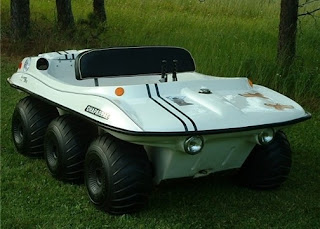 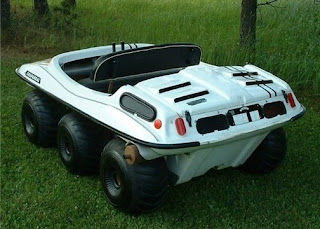