I’ve known Harold “McGoo” McGruther since 1988 in those 22 years I’ve gotten a few calls from him saying “hey meet us for lunch I’ve got an idea I want to bounce off you.” This particular call came in late winter of 2000, the idea was a pro only downhill bmx race series.
It seemed simple, fast, large jumps, technical with a big purse.
Come on pro football players don’t play on a Pop Warner field why do pro BMX racers compete on the same track as a 5 yr old novice?
McGoo put together a plan/proposal, a team of 5 partners was assembled (McGoo, Bill Bryant, Steve Swope, Mat Hoffman & Myself) and Planet Seven productions was born. Vans footwear stepped up with a big budget to make it part of their Triple Crown event series, venues were signed up and we were good to go.
Now at that point I was already on a couple of payrolls, one being Hoffman Bikes/sports association the other being ESPN for their B3 events and X-Games. So add in the these three races to my already crazy schedule and that put me at 23 events, somewhere around 50 flights and a drive across the country and back.
For the race series my duties included track construction, managing the crew of workers and keeping the equipment going. A couple of things come to mind right away. One, none of us had really ever operated any equipment much larger than a riding mower let alone dozers, loaders, rollers & off road dumptrucks. Two, there might be a reason 30 year old dudes are available at the drop of hat to come move dirt and that’s the same reason they don’t have a job in the first place. Stoners, steep hills and heavy equipment is cause for stress.
Venue 1 Woodward Camp, Woodward, PA.
5 weeks to build, one blown turbo in a Bomag roller, one dislocated shoulder and the track is still there today. 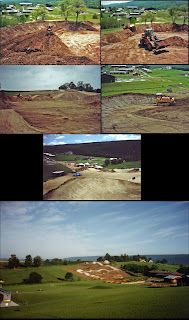 Venue 2 Wilmot Ski Resort Wilmot, WI.
Build time, Fuck I don’t remember but it was way too long to be stuck in that Hell Hole!
The first build attempt was rained out the race postponed. Second build complete and said to be the best track of the series. The race was rained out, I’m pretty sure I cried like a baby.
Casualties: 1 brand new John Deere loader and another bomag roller. 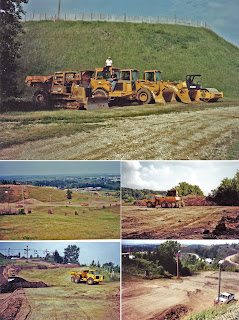 3rd Venue Mountain High Ski resort Wrightwood, Ca.
Build time: a couple of weeks. We had it down on this one, the people were great to work with and we had a blast. Since Wilmot was rained out we had to run two races so the last third of the track was made into two sections for one race on Saturday and the other for the finals on Sunday. Up until this point the largest jump was a step down at Woodward at 43′. I thought this is the finals the winner is up for a $50,000.00 pay off I’m making something BIG! So we came up with a 65′ step down triple finish line jump, to double it was 35′, 65′ to clear it. I thought we would some exciting finishes if someone puss’s out and the other dude goes big. Everyone had it dialed by the first practice?
Chris Sanchez walked away with the $50G’s and BMX, He took his winnings and went to college.
Casualties: another Bomag roller. this time we were told these thing weren’t meant to be used to pack jumps on hills? 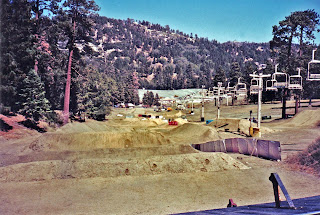 That was the end of the Triple Crown BMX series but we did take it to the X-Games line up for the next three years, 01-03. The Racers were the best athletes I’ve ever had to work with, they were extremely appreciative and stepped it up with every technical or large obstacle we threw at them.
Here it is 2010 and every summer I still crave just a couple of days behind the blade of a dozer. 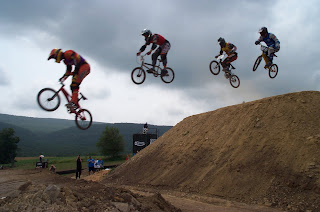 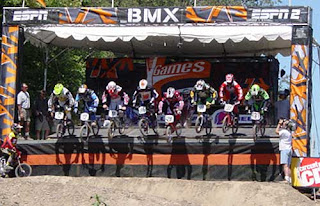