I’m sure it’s already all been said on a hundred different sites & blogs but Mike D, Grant, Harpoon and their staff did a bang up job putting this event together on every level, thank you.
We threw together a booth, sold some parts had a great time with a ton of old & new friends.
Having my bike out in the public eye was interesting. I built this bike for me, the way I saw it in my head & obviously not following any of the current trends so I really didn’t know what to expect and didn’t much care. What really mattered to me was that it was done and now I could ride it all summer.
Well, the response was pretty overwhelming. One of the first people to compliment was Ian Barry from Falcon Motorcycles and in my opinion their stuff is on a whole different level, that was the first time of many that I almost fell over in shock.
In a sea of amazing work the bike ended up winning “Best In Competition” chosen by Jeff Wright of Church of Choppers fame. Almost fell over again.
After the making the anxiety ridden stage walk to get my goodies I’m standing in the booth in a daze of beer fueled excitement when Sugar Bear Walks up to me and asks “did you build that Swing Arm Bike? I replied yes, he extends his hand and says amazing job! With a tear in my eye I shake his hand and tell him that means A Lot coming from him.
I’m not sure how I managed to stay upright on that one?
Good Times, Life is good! 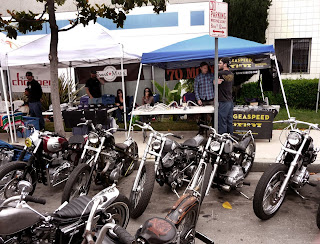 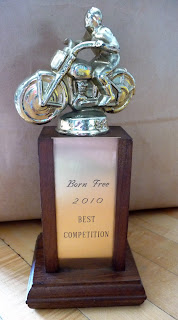