Well yesterday Erwin showed up with his immaculate little box trailer, I went over all the ins and outs of the bike then gave him a quick starting procedure lesson and proceeded to watch him gear up with a new “vintage” silver metal flake helmet, aviators & some bitchin new gloves then attempt to get the kicker to move let alone start the thing. After a few minuets I started it for him. he mounted up for his “test ride”, drug clutch up the street & disappeared. I turned and ask Bob how long should I wait to go rescue him? Bob said “UMMM 10 minuets?”
Ten minuets went by, I got on my bike and found him right around the corner. he starts frantically waving me over, new gear thrown in the bushes, sweat pouring off his face, I pull up and he says It just died, it just died at the light. I roll my eyes give it half a kick it fires right up. ” I thought it would be like a new Japanese bike” He says.
I take off back to the house, he follows, Bob and load the bike and send him on his way.
I probably should’ve included a nice set of links so he could wear it around his neck at the club.
Hey Bill, remember when you sold that gold Triumph? 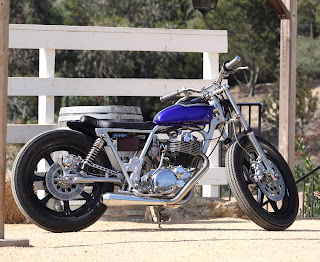 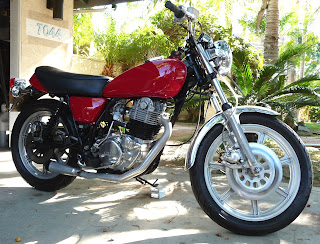