Initially I contacted Christian @ Xian because I liked the shape of the seat he was running on his personal bike and I figured it would be a good start for the shape I was about to attempt. Christian sent me to Kevin Baas instructed me to ask for the “Xian pan” at this point I had just sold my Road King and allocated some of that cash towards this project so I figured that this would be a good bike to have a Xian seat but other than the shape I was unsure of what I wanted. After going over final dimensions with Christian I cut the seat pan down quite a bit changed the overall contour and flattened it out some.
Then I ran across the photo of the Trump below with the tuck & roll job, I really liked the army canvas sackcloth seat he had done for McGoo’s Smoking Gun & thought the two ideas would come together nicely.
For whatever sadistic reason Christian agreed to do it. So back in June I sent the seat pan & artwork for the bottom side tooling. A few days later I get email photos of the completed underside, Awesome…   At that point Christian tells me he has a guy to do the tuck & roll panel so he sends it off, when it returns he hates it and wants it done right. This is when he hunts down an old time upholstery guru, learns the real way of tuck & roll, buys a sewing machine, and begins to master the skill. The first panel takes him 6 hours but right at the last little bit she goes sour. I get the email with the news and that he’s going for it again in a couple days when his fingers are no longer sore. The next round was success and is what you see here.
I’m just blown away with the level of commitment, the craftsmanship speaks for itself and now Xian offers not only fine hand tooled seats but upholstered too. I’ve thanked him a hundred times but Thanks again Christian and I have a bunch of other ideas if you game. 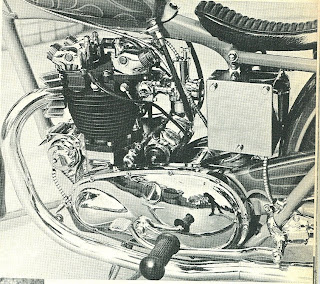 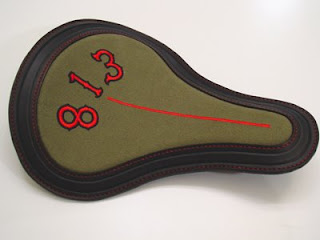 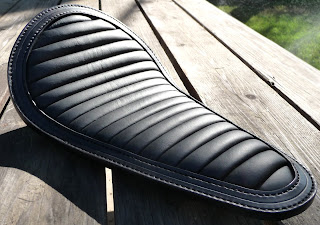 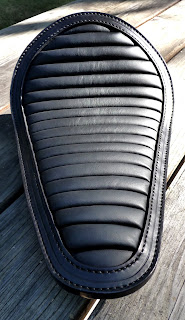 When I bought this bike it was a runner so I decided to ride it around the neighborhood for few days just so I’d have a feel or comparison to whatever it ended up like. Well I put just over a hundred miles on it before Bob & I tore it down, the more we took off the more we discovered how many really important parts were “fingertight” ,to the point that I felt blessed to be in one piece… 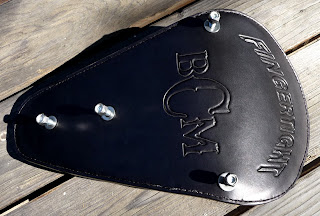